In short - it’s the perfect combination film to give you
enhanced privacy and protection from the harmful UVA
and UVB sun rays while safeguarding your car’s interior
and increasing your car’s performance.

In the past, car owners had to choose between carbon window tint or ceramic window tint film. Although each technology had its advantages, nano carbon tint and nano ceramic window tint also came with weaknesses — forcing car owners to make a compromise no matter what they chose. That’s all changed, however, thanks to Rayno Window Film’s continuing drive for innovation in the automotive window film industry. We found the perfect formula to combine the unique strengths of carbon material and ceramic material; while also developing new techniques that tackle their shortcomings. The result is our Phantom Nano Carbon Ceramic window film, which offers the best of both worlds without forcing drivers to compromise in any way. They say two is better than one, and in the case of Rayno Window Film’s Phantom series, it’s much, much better.

To understand what makes the Phantom series so revolutionary, let’s take a look at the differences between carbon vs. ceramic auto window tint:

Carbon tint is infused with carbon particles, which are highly effective at blocking infrared light. This helps keep car interiors cooler and won’t fade over time the way dyed films do. However, the main disadvantage of carbon is that the particles are so large that light can bounce inside the film, creating glare and haze that make it difficult to see through at times. 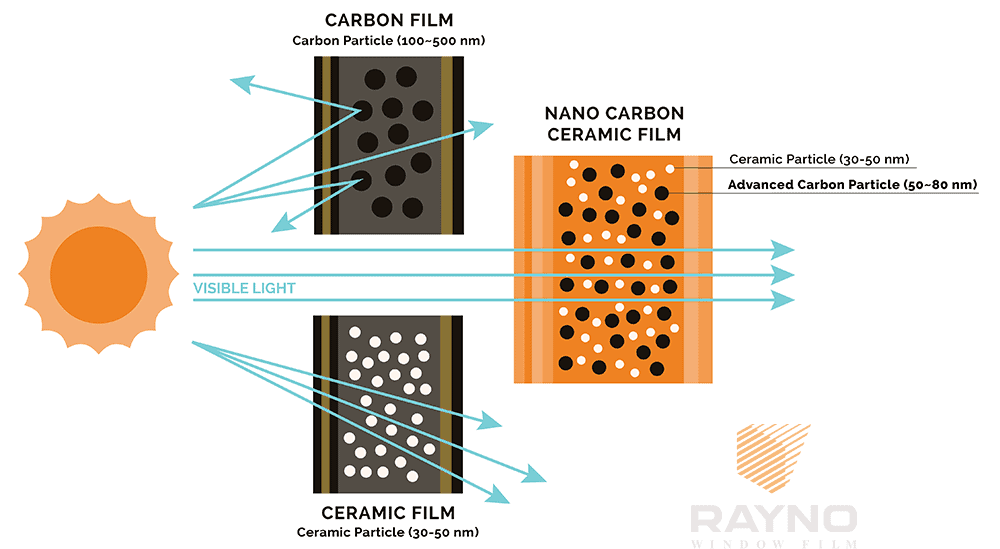 The Phantom Nano Carbon Ceramic window film series incorporates innovative technology that allows both carbon and ceramic particles to share the duty of protecting your car’s interior with the advantages of both while significantly reducing the downsides they would have on their own. Our unique formula decreases the size of carbon particles down to a nano scale, preventing the haze and glare from typical carbon films while maintaining its incredible durability. What’s more, by encapsulating high-purity ceramic particles, we’ve further enhanced the color stability of ceramic while maintaining its higher visibility. Rayno Phantom is an innovative product with improved visibility and durability, with higher color stability and heat rejection compared to all other automotive window films and metalized films on the market.

Ceramic window film, on the other hand, is made with non conductive ceramic particles that are small enough to prevent glare or haze while still blocking infrared light. However, ceramic car window tint oxidizes relatively quickly. This means the nano ceramic window film will make the film’s original color lighter, so the film’s shade becomes lighter, faster than carbon films.

Our Phantom series represents a quantum leap in car window films unlike anything else available today. By combining two proven technologies with our unparalleled techniques, we’ve created something that’s greater than the sum of its parts — the strongest and most effective protection for you and your car’s interior. Block the sun’s UV rays and experience the UV protection from our film. Find the closest Rayno Window Film dealer to you today and see the Phantom series in action for yourself.